Cont. from the Blocky World thread

As I mentioned about a week ago, I’ve decided to pick up my old Minicraft clone again. However, I’ve decided to rewrite it now that I’m way better at programming than I was, and I’ve also decided to give it a new name. I realized that PokittoCraft sounded better than Blocky World, but someone suggested Blockitto and that sounds great, so that’s what I’m going with.

This thread will be dedicated to my progress updates on the game. I’d expect an initial alpha release sometime within the next month for sure, and perhaps even within the next week if development goes well – probably not this week though seeing as I’m pretty busy with midterms.

Anyway, so far I’ve made a few new sprites. Here they are in action:

I’m now using the Pico-8 palette so I can use drawBitmap() which is a little less annoying than directBitmap(). I’ve also recreated my original mockup for Blocky World with the new Blockitto tileset: 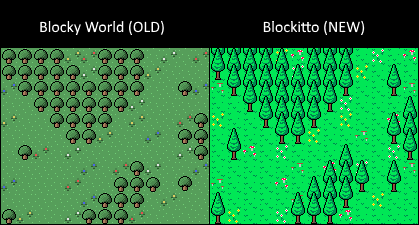 Whereas BW’s style was heavily inspired by the original Minicraft textures, Blockitto’s style is very much its own thing. It’s a lot more lush and it looks pretty good IMHO. Excited to get started on some actual code next!

I like the new grass, but I’m not sure about the new trees.
I don’t know why, but they don’t look as interractable.

Also I slightly preferred the old name.
I think merging ‘pok’ or ‘itto’ into game names gets a bit samey.
Maybe something like “Block World (Pokitto Edition)” would be better?
(Maybe that’s just me though? Maybe other people prefer Blockitto?)

(As always, if you need any help with anything code related, just ask.)

I like the new trees. The old ones remind me a little about mushrooms

I like it. Maybe I’m a little addicted to *itto ending, but it sound so damn good!
Pico8 palette is awesome, it give a better touch to everything IMO.
Maybe adding some variety to the trees (flip randomly on vertical axis, add some different fruits on them) will help improving the final result.

Good luck and have fun with the development!

Thought I’d share a little progress update. The game is coming along well, so far I’ve got an infinite world that you can walk around and dig holes in. The way I implemented this is a pretty long story, but I thought I’d share how exactly the world data is stored:

Previously I had an array for the blocks in each chunk. The problem with this is that if I wanted to place a tree or a flower, for example, it would be tied to a specific ground block (in the case of trees and flowers, grass). Now I’ve got a ground block array in each chunk and I’ve also got “tile entities,” which are stored as vectors in the chunk object. These also allow for more freedom gameplay-wise as I can implement HP for, say, the trees and allow better axes to do more damage and thus chop down the tree quicker. Trees, flowers, and mushrooms are currently all ground objects.

Now, about the infinite world: I essentially just made a member function of my ChunkManager class that is called whenever the player moves between chunks. It unloads chunks that are far enough away from the player (i.e. destroys that object), then loads (creates) the chunks within radius that haven’t been loaded yet. Of course this means the chunk and all player modifications in it are reset when the chunk reloads, but that will be fixed soon once I implement saving.

Roadmap for now until the first alpha release:

I also got the current demo to run on hardware, currently you can walk around and dig holes:
video on dropbox

Will post again at some point, once I’ve got some more done.

I’m not sure about the new trees.

Maybe I’d make the trunk shorter, the proportion looks kinda too big. And at the bottom where it goes into the ground I’d make it round, now it looks flat. With objects that there is a lot of on the screen these details matter because they get multiplied several times, so it’s worth to invest some extra time into fine tuning each pixel.

Are .mov files not uploadable to the forums?

This is along the lines of one of the things I don’t like about them, they look very tall/long.

The other thing I don’t like is that they look quite pointy/conical, but maybe that’s just because we don’t have many of those kinds of evergreen tree where I live.
(And to be honest I probably couldn’t do better anyway).

I agree about the brighter colour,
though I also think it would be good to maybe have different greens for different biomes or seasons.

@epicdude312 , I notice you do not seem to have any graphics glitching issues like @wuuff

What screen mode are you using ?

Okay, just going to reply to everyone here.
@drummyfish - I agree with you for the most part. I’m trying to make the trees similar to the poplar trees from the Highlands mod for Minecraft. I’ll take another look at the textures before too long.
@Pharap - .mov files are uploadable to the forms, it’s just that the filesize was too big.
@jonne - I’m using Mode 2. Much easier than using directBitmap() like I did previously. I don’t have any clue why @wuuff is having issues while I’m not. I can send you my source code if you’d like.

If you could share one .h file of your graphics tile and the bit of source where you call drawbitmap then I can take it from there. Thanks!

I designed a new poplar tree sprite, what do you think about it?

I tried making the leaves a little more natural, the tree a little less cone-shaped, and the trunk less flat. I also recolored the bark to make it look more like an actual poplar tree.

nice, I cannot wait to play it

It’s getting late and I don’t have the time to do any code (couldn’t code today as I was busy with midterms), but I made a logo for the game! Check it out:

It was actually made as 2D text and then I scaled the rows horizontally, added a little shadow under it, and touched it up. It looks pretty nice IMHO, I’m proud of how it turned out.

I also put it on my previous mockup: 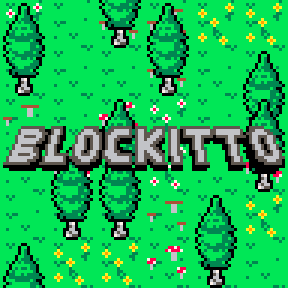 Anyway, tomorrow I might not have much time (kinda busy) but hopefully I’ll be able to at least implement Perlin noise.

I designed a new poplar tree sprite, what do you think about it?

Much nicer.
I think the top sticks out a bit too much though.

I really like the mushrooms and the flowers though.

When we’re at it, I’d still try to polish that bottom a bit:

I really like that sprite, will put it into the game when I have time (and credit you of course!)

Actually I’d make the base a bit more brown, because of shadows and grass preferring light, otherwise that looks good

Originally I dismissed that because people always draw grass under trees, but when I actually checked, I discovered it’s true, there’s always a patch of grassless dirt around a tree: 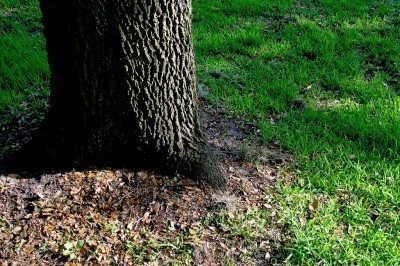 But like I say, people always omit that in games, so I suppose it’s a matter of style/taste - it depends whether you want realism or an idealistic fantasy.

I put the new sprites into the game, as well as implementing Perlin noise!
You can see it in action here:

(Game runs at a solid 60 FPS in simulator but I had to reduce the size of the GIF to embed it into the forums.)

I don’t know if this runs on hardware but I’d assume so as I’m not making that many new objects. Working on compiling to hardware right now, will edit this post with an update when it’s done.

EDIT: It does run on hardware but I get a massive lag spike whenever I load in a new chunk. Will have to look into that, it seems my noise function is taking up a decent-sized chunk of RAM.