Its interesting, that you all have machines with “so little RAM”… I always max out the ram on all my machines. I bought a Legion Y540 for my wife two weeks ago, and even before I turned it on, I put in 16GB more RAM

Or then I am just a superstitious fool. Any time something does not work I think I must be out of ram

Edit: I sound like a jerk. What I mean is I’ve always thought that RAM is the most important component. But then again, its probably mostly because of the CAD software running on top of Windows that I’ve grown to think that.

Android used to just melt this poor laptop. It was so heavy

I used to want to be an android dev before I discovered desktop java lol. I also switched from intellij to NetBeans and that made a huge difference

I’m actually very impressed with how little RAM I use in general. I don’t ever even get close to maxing it out on my system with 8GB (that I’m on now). And my Desktop is like “yawn… is that all you got?”

Though I don’t run super heavy stuff (which is funny since I’m a java dev). I got IDE’s and gradle and jvm’s and firefox all running and even on my desktop am still under 8GB

Oh god, you would all laugh so hard knowing what my home computer is hehe can almost just run Femtoide on it, anything else is too slow.

You have gathered the entirety of my interest

I always max out the ram on all my machines.

I’ve only ever maxed mine out twice, both times on the same day.
I was trying to test the period of a hash algorithm and I ended up doing something that chewed up far too much memory.

Memory-wise I always have far too many browser tabs open.
When I restore Firefox it loads one tab from each window and I have about 20 windows, hence it ends up being about 35% when I start, and it’ll gradually creep up to 40-50% as flick through pages.

If I were better at keeping my number of open tabs down it would probably be more like 25-40%.

My main text editors are quite small.
Visual Studio chews up a fair bit when I use it,
but I only use that for C# and C++.

Otherwise the games I play vary drastically in how much memory they use,
but typically if I’m running games I won’t be using anything else.

I think its because I am used to Adobe + SolidWorks

I think commercial software tends to just chew up more resources in general, probably because the developers are under pressure to meet deadlines so instead of choosing the most efficient algorithms and datastructures (or taking the time to research other options) they reach for the easiest solutions.

Open source stuff tends to either be developed in people’s free time where they have the luxury of being more thorough or by non-profit organisations who care more about quality than deadlines.

Anecdotally, I think Adobe in particular is quite bad at using memory efficiently.
I’ve only ever owned Adobe reader though.
(I technically still have it, but I tend to view PDFs with Firefox instead, and I have no other uses for it so it just sits there unused.)

I can’t say I’ve ever experienced that.
Though I get the impression Windows 8(.1) is a lot more stable and less memory hungry than earlier Windows (not that I remember much about earlier Windows).

I just loaded up the version I have installed (for the first time in eons) to see how much of what he said is true.

The version I’ve got loads the PDF more or less instantly - no splash screen, no pausing.
I still has the sidebars and the top bar, but the sidebars are collapsable.
Admittedly the stuff along to top is probably bigger than it needs to be, but you can get rid of most of that too.
It seems you can’t get rid of the tab bar, which wouldn’t be a bad thing if it weren’t so large.

It’s not brilliant but it’s not exactly terrible either.
I don’t doubt for a moment that older versions were as bad as the guy in the video says, but more modern versions aren’t as terrible.

I use a Cad program with very much 3d-components and had never had problems with running out of memory. I started with 8 Gb and upgraded to 16 Gb just for Ark evolved, since that is a real memory hog. But thats understandable since the worlds take up to 80 gb on the HDD itself. 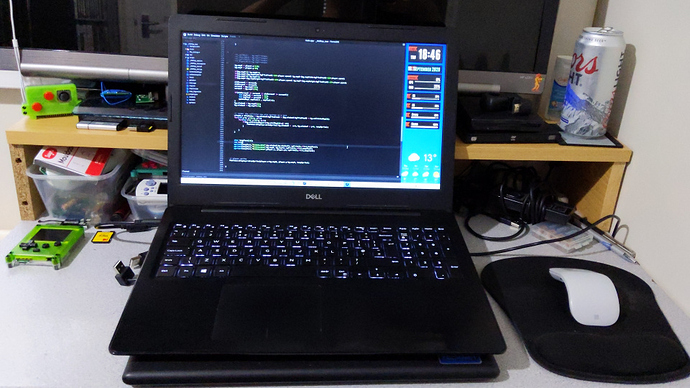 You have a bear on your desk?

That explains a lot. For a while there I thought the reason I couldn’t see the bear was just because I’m really bad at playing where’s Wally.

To be honest, Coors Light can bearly be called a beer either https://www.beeradvocate.com/beer/profile/306/837/

Oh I see what you did there … I bearly noticed it.