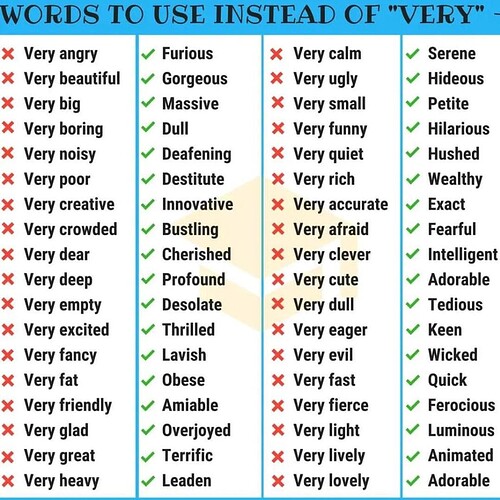 Something Donald Trump should take note of.

was this list written by a non-native speaker as well?

Very interesting! Thank you very much, this will be very useful in the future!

interesting! Thank you very much, this will be very useful

I see what you did there.

While I agree that English has a myriad of wonderful words to choose from, I wouldn’t discourage people from using ‘very’ either.

Of course, there’s all sorts of hidden usage rules that the dictionaries don’t always tell you. For example, ‘stupidly’ is usually used in a disparaging way - you might say Jeff Bezos is stupidly wealthy, but you probably wouldn’t say Ghandi was stupidly kind (unless you really thought he was kind to the point of being ‘stupid’, e.g. too trusting). But it’s better to try and fail than to avoid trying.

As for the quality of that list, you might want to take it with a pinch of salt.

For a start, that chart has confused ‘leaden’ with ‘laden’.

Laden (pronounced /ˈleɪdən/) means heavy, and is releated to the uncommon verb lade, meaning to load, as in loading cargo or loading a shipment.

Even then, I find that ‘laden’ is rarely used on its own. It’s more often used either:

To be honest, I’m not really sure there actually is a better alternative for ‘very/really heavy’.
Most alternatives usually imply ‘large’ rather than ‘heavy’, e.g. massive, bulky, hefty.

I’d best not bore you with the rest (unless anyone is particularly interested?).

To be honest, I’m not really sure there actually is a better alternative for ‘very/really heavy’.

Well, you can very often replace “very” with “f**king” and unfortunately I know a few people who do.

Expletives are best used sparingly, else they lose their impact.
Or at least the stronger ones anyway…

I wouldn’t hesitate to describe something as “bloody heavy” unless there were very young children around.
(I’m half and half on OAPs.)

There’s also plenty of minced oaths to choose from - e.g. bleeding, flaming and ruddy.
(A certain character on a certain British soap opera used to be fond of ‘pigging’, though I always thought it was exceptionally odd.)