Letting go of my Arduboy, and I thought somebody here may be interested? This one is from the batch where Kevin was experimenting with holes in the PCB as a sort of ‘speaker-grill’! 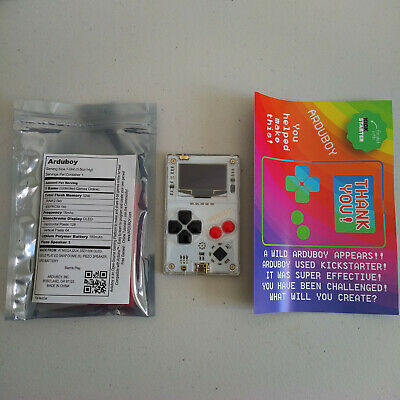 Everything Arduboy that you want to know can be found at. This is my genuine original Kickstarter Edition Arduboy - used, but in excellent condition. USB cable included.

Not sure I need another one but I do not have a Kickstarter version. What numbers were made with the ‘speaker grill’?

Are you planning on posting it on the Arduboy site too?

Not sure I need another one but I do not have a Kickstarter version. What numbers were made with the ‘speaker grill’?

Maybe the first batch of a thousand or so apparently?

Are you planning on posting it on the Arduboy site too?

Nope - I have left the Arduboy forum, not worth going in to - did the thread get deleted or something? Also Kevin’s attitude to customer service was rubbing me the wrong way, here’s a perfect example - where a post gets moved and renamed to “I bought something I don’t understand”

Also, the every-other-week brainstorms of the next big idea started fatiguing me a little!

this could be part of a juicy tiny console soup-opera.

What you have there @uXe?
j-j-just my arduboy
I saw more than 1 bit colors. Stop lying to me!
pokitto is pregnant with my son! (dramatic music)

Anyhow… Isn’t that price too high for an used arduboy

this could be part of a juicy tiny console soup-opera.

Anyhow… Isn’t that price too high for an used arduboy

‘Used’ is relative - and this one is very-lightly used. And there are clones on eBay selling for more… Honestly, of all the ATmega32U4’s I have in the house, the one in the ‘real’ Arduboy would have been reprogrammed the fewest times!

did the thread get deleted or something?

Yes it was deleted.

(As far as I’m aware I read all of it before it was deleted and still don’t fully understand your decision to leave, but I’m not going to pry or debate the issue, particularly not in public.)

It was moved because it was originally a reply to the Ardynia thread and was thus completely off-topic.
I agree that the title wasn’t particularly good,
but I’d chalk it up to not paying it much thought rather than anything else.
Kevin later changed the title to something better (“Why Arduboy?”).

Let’s be honest though, the content of the post was bordering on the side of trolling/flamebait.
Signing up to a console’s forum to say negative things about a console (that you recently ordered and don’t actually own yet) to people who own and like said console is very rude to say the least.

Personally I think the fact more or less everyone responded in a considerate and sensible way (as opposed to retaliating with ad hominems) is a sign of just how courteous the userbase is.
(Many of whom are also part of the Pokitto userbase of course.)

That I can kind of understand.
It somewhat muddies the water as to what’s actually happening,
or which things are personal projects and which are actually Arduboy related.

(Though personally I’d still rather have that than having so little discussion that tumbleweeds start rolling by.)

Yes, absolutely. What I am trying to get at is more the undercurrent of irritation towards paying customers has been creeping in - there is a time and place for venting frustrations ‘away from the office’, not in a ‘work’ setting with other customers watching? Anyway, here and now is definitely the wrong place for this particular discussion!

And there are clones on eBay selling for more…

Speaking of clones, @filmote have you noticed the local Jaycar spruiking the Press Play on Tape logo?!

I should demand a free DuinoBoy!

LOL! I think Maycar is supposed to be a homophone for Maker maybe??

I hadn’t thought of that but yes it makes sense.

I agree with you that Kevin’s handling of backorder queries and complaints is a bit ordinary.