Yeah it’s best to avoid dynamic_cast as much as possible. Ask yourself what you want to do with those planes, here is a few ideas:

All of those are much quicker than a dynamic cast and none requires the RTTI.

In regards to number 1:
If it really is suitable then yes.
XNA uses this to group updateables and drawables into their own lists.

In regards to number 2:

In regards to number 3:

If you do end up doing that, please use an enum class instead of a plain integer and defines.
It’s a lot harder to mess up because it’s typesafe and it’s more self-documenting.

This has the added benefit that you can’t do this:

With an enum class :

And as for number 4
That’s going to get really awkward really quickly so I’d avoid that at all costs.

The visitor pattern is probably a much better solution, even though it’s a little hard to get right on C++ because of the complexity of C++'s rules.

I suddenly realised I wasn’t aware of any good C++ examples of the visitor pattern, so I just wrote one: 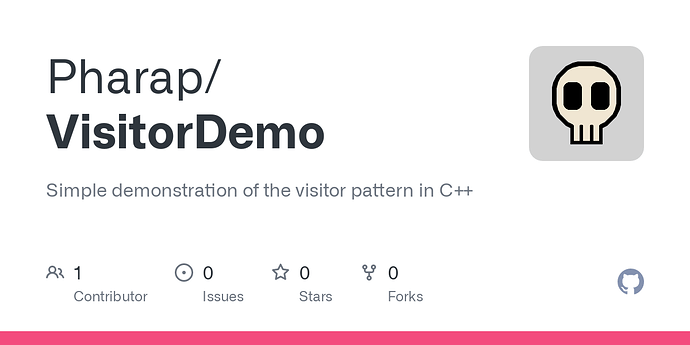 Simple demonstration of the visitor pattern in C++ - Pharap/VisitorDemo

As you can see, the magic is that the visitor object gets to decide how to react to the specific type of the object. This can be very useful, especially for processing tree-like structures.

This is known as ‘double dispatch’, while lone virtual methods employ what’s called ‘single dispatch’. Both are an example of dynamic dispatch.

Ultimately I’d still warn against this if a better system can be found.

Another option would be to switch to a component system.

Again, they’re kind of difficult to understand and get working, but they’re very flexible.

This one is long, but game programming patterns by Bob Nystrom is pure gold:
http://gameprogrammingpatterns.com/component.html

This one is perhaps less useful because it’s for Elixir, not C++, but it’s full of illustrative diagrams and fluffy bunnies:

Personal blog of Yos Riady. Yos is a Software Engineer based in Singapore.

(There used to be a really good article about component systems somewhere but I think the website got shut down and I can’t remember what it was called.)

You could use a generic signal system,

switch to a component system.

It’s where I started from but I then I change my mind midway to a more object oriented with classic inheritance.

This one is long, but game programming patterns by Bob Nystrom is pure gold:

Already on my radar

so I just wrote one:

Thanks! Clean and interesting way to structure a program.

Thanks all for suggestions.
It would be really nice in future to read some in deep tutorial on programming patterns. Maybe a mid size game that take advantages of a well structured software.

I have to agree, this book is pure gold!! And very interesting too 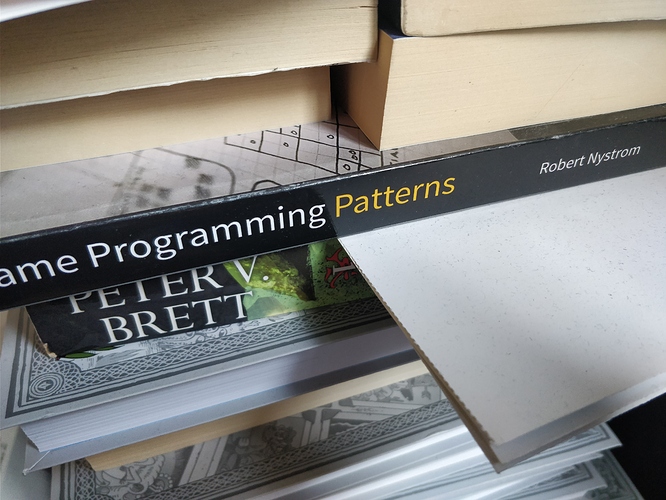 Entity Component System might be a bit too heavy for the ram we got in the pokitto thought, but maybe I’m wrong. I feel like one class per entity is better for the pokitto?

Double dispatch is indeed very nice to detect collisions between shapes, but is also great for anything of various forms that can interact with each other, as long as you don’t have too many forms - 1 form gives you 1 method, 2 gives you 3, 3 gives you 6, 4 gives you 6 … (not counting the duplicate methods that gets the same parameters but reversed).

Possibly, it depends how flexible you make it.

If it was limited to a fixed number of possible components then it might not be too bad. E.g. if you only had drawing, physics, sound and maybe a few bits of game logic then it could be kept smallish.

It’s surprising how little space something will use if you’re careful with how you use memory. Techniques like flyweights and pooling can really help to keep the cost down.

Also, compared to what I’m used to with the Arduboy (2KB, ~half of which is eaten by the library), the Pokitto’s 36KB feels massive.

Double dispatch is indeed very nice to detect collisions between shapes, but is also great for anything of various forms that can interact with each other, as long as you don’t have too many forms

Every pattern is a double-edged sword somehow.
The key is to make sure the positives outweigh the negatives.

The only system I can imagine needing lots of different ‘forms’ is an expression tree/parse tree. Most other things will usually have an alternative (e.g. using an enum class as a type identifier).

Actually, while I think of it, would anyone mind if I split everything from here onwards into a separate thread called “Alternatives to dynamic_cast?”.

We’ve got kind of far away from the original topic and it would be a shame for this discussion to be buried at the bottom of an unrelated thread, I think it deserves its own.